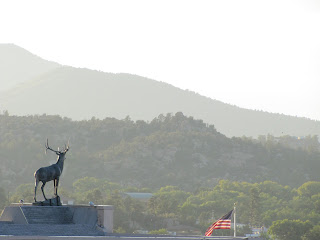 The view from Nob Hill from behind the Elk Theater.

We were so busy that Labor Day weekend surprised us this year. Andrew has so little time off that we decided we had to take advantage of the holiday to get in a little road trip, even though it was the last second. We wanted to go someplace cooler, dog-friendly, within driving distance, and that still had room. 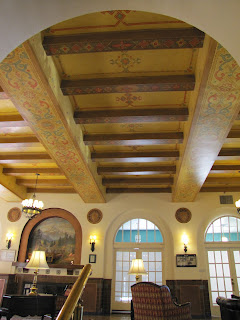 The lobby of the Hassayampa Inn.

The Hassayampa Inn is so large that they still had rooms, and they weren't priced astronomically, either. They have a "wing" of dog-friendly rooms. No pet fee! You leave a cell phone number so they can call if you your dog is being barky while you're out (in contrast with many places that simply prohibit you leave your dog in the room alone at all.) That said, we barely left Frida "at home" the whole weekend, given the great amount of dog-friendly establishments in Prescott. 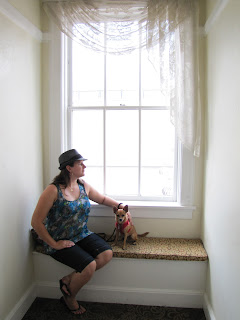 Frida and I at the Hassayampa Inn. Photo by Andrew.

The Hassayampa Inn is exactly the kind of place I like to stay: charming, historic and haunted. Open in 1927, its architecture is described as "an eclectic mix of Spanish Colonial Revival and Italianate features," but what enchanted me are the Pueblo Deco details. Famous guests include Tom Mix, Will Rogers, Clark Gable, Gen. John Pershing, Tom Selleck, Sam Elliott, Joan Rivers, Kim Basinger, Alec Baldwin and George W. Bush. But the most famous guest, perhaps, is the ghost of  Faith Summers. (We snuck up to the room she haunts and took a picture of the door, but no orbs or otherwise were revealed.) 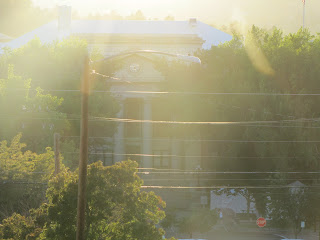 The Prescott Courthouse against the setting sun.

The heart of Prescott's downtown is the courthouse, where criminals such as those hunted by the Earp brothers and fellow lawman Doc Holliday were tried. Prescott was known for its brothels, saloons, and opium dens around then-notorious Whiskey Row. Whiskey Row still keeps that spirit of raucousness alive. 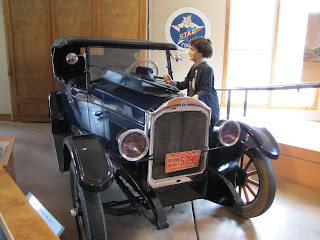 Mannequin representing Sharlot Hall next to her beloved Star Four Touring Car, (Durant Motors, 1927) at the Sharlot Hall Museum. "Besides the low price of $737.00, she liked its open body and pulling power on bad roads" the nearby placard reads. I knew I had found a kindred spirit in her, being that I love our Miata because we got at it auction for a good price, it's convertible and I have a penchant for maneuvering it on unkempt, scenic roads that lead to camping in remote areas.

In my opinion, any trip to Prescott should begin at the Sharlot Hall Museum. This darling museum gives a great overview of the history of the region and honors a pioneer woman who loved and fought for Arizona: Sharlot Hall. I relate to her adventurous, free spirit and passion for this land. This is an excerpt from her poem, "The West":

The wanderers of the earth turned to her, outcast of
the older lands--
With a promise of hope in their pleasing, and she reached them pitying hands;
And she cried to the Old World cities that drowse the Eastern main:
"Send me your weary, house-worn broods, and
I'll send you Men again!
....
Seed of Man--Seed springing to stature and
strength in my sun--
Free, with a limitless freedom no battles of men
have won." 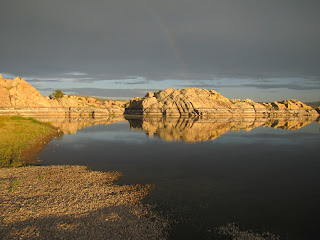 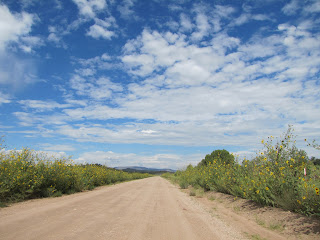 One such primitive road I love to explore in the Miata: Williamson Valley Road (Yavapai County Road 5) between Prescott and Seligman. It's one of Arizona Highways's Scenic Drives. 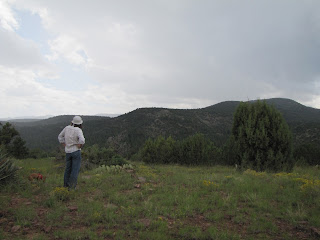 Our drive culminated in a very private hike down the Oaks & Willows Trail in Prescott National Forest. This was also an Arizona Highways suggestion. We got a little confused trying to find it, being that the Walnut Creek Ranger Station they use as a marker in the directions hasn't been there since the nineties!
Posted by Eva at 1:25 PM