A Story About a Few Hummingbirds 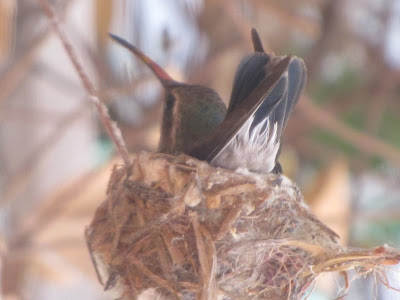 This is a female Broad-Billed Hummingbird who built a nest and laid eggs by our living room window this summer. Predictably, we watched her a lot and took photos. We noticed when she disappeared. 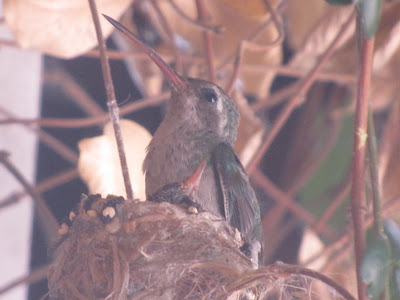 You can see the chick's beak and head emerging from the nest here.

I was hanging out in the hammock near the nest when I realized that the chick was chirping incessantly. We had some friends over for dinner and we sat at the table out front. After dinner I noticed that the chick was still chirping and the mother was still nowhere to be seen. I googled it and found an article claiming that if a chick chirps incessantly it's starving and needs first aide immediately. I gave it some sugar water with a dropper. The chick settled down.

Our dinner guests excused themselves (they had a baby bird issue at home, too!) and I went back to Google. After seeing the chick and mother every day, watching her harvest spider webs for the nest that started out as a weird little tuft stuck on a vine... after all that, I didn't want to see the chick die. But who would help me? It was a Sunday night. If I can even get a hold of anyone, they will say it's the process of natural selection: baby birds die all the time.

But I care. I posted a photo of the tiny thing on facebook and somehow it got the name "Chuck." (I misspelled "chick" and then it stuck).

I found a Tucson wildlife rescue online. There was a phone number--and someone answered. I explained my predicament and the person gave me Noreen's number. (There was an awkward moment when her husband answered the phone and I was like Is Doreen there? And he was like Who? and I was like this guy wonders who the crazy is calling his wife this late on a Sunday. "Doreen" tuned out to be Noreen Geyer-Kordosky, founder and director of Tucson Mountain Hummingbird Rescue.) First she asked me if the thing was definitely alive, since I had given it sugar water with a regular dropper. (Sugar water can be lethal to the hatchlings and feeding them from a regular dropper can drown them; they take sustenance through the gullet and it gathers in the crop. The dropper needs to have a type of extension.) Noreen also explained that when the chicks go from hatchlings to fledglings, the mother doesn't sit on the nest anymore. She just comes for quick feedings periodically. She explained that for me to know for sure if the nest was abandoned, I had to watch tomorrow morning at peak feeding time (5:00 a.m.) for an hour and a half without blinking. (She was only kind of kidding.) If I didn't see the mother, then she was really gone. In that case, Noreen would come pick up the fledgling.

I was so pleasantly surprised that Noreen had actually volunteered to pick up Chuck. This is one of the reasons why I'm going to miss Tucson. There are people who care here. They even care about a tiny little bird I thought and it made my heart warm.

I googled the issue some more and found that hundreds of baby hummers in the U.S. are "rescued" unnecessarily by nest audience members. In other words, my case exactly: a closely I mean closely watched nest.

I got up at five the next morning and curled up in my hammock. I had the phone in my hand. I watched the nest and the until an hour and a half had gone by. There was plenty of bird activity, but no sign of mom.

I called Noreen at 6:30 on the spot. (She had told me she'd be up.) Finally I was free of the hammock and more importantly, free to brew coffee.

It was great to meet Noreen in person. She showed me a tiny worm-like hatchling she had picked up that morning. She had rescued 60 hummers since January--a number a bit up from normal. Wow, that many other people care about baby hummingbirds? Noreen told me Chuck's outlook was good and she could release it back here when it's ready and did I want to sponsor a feeder?

Of course I volunteered to sponsor (maintain) a feeder for Chuck. I anxiously awaited the day I would see the wee bird again. But weeks went by and I didn't want to call Noreen because I didn't want to hear bad news. She must not be calling because it went bad. 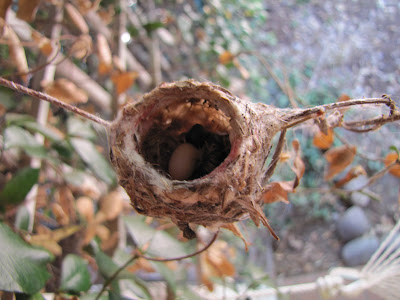 This is Chuck as a hatchling and the egg that never hatched.

One day Noreen called, and she was very honest, bless her. She had forgotten that I had volunteered to sponsor Chuck; she recovered fully and was re-released. Chuck was (of course) a female. And there had been another egg in the nest I had hadn't seen. It never hatched.

But would I like to sponsor a feeder for another female Broad-Billed who was ready to be released? Yes! I was just happy just to hear Chuck was fine!

The next day Noreen brought a skinny little hummingbird in a mesh "carrier" (pictured below). She had a branch in there to perch on and she showed me quite a skilled hover. I took some pictures while Noreen unzipped the carrier. It took the bird a second to realize it was open, then she hovered out carefully and perched for a moment on an orange tree branch. Assertively, she shot up into the sky, so high that she became a microscopic spot my eye could no longer follow. They do that, said Noreen. You may see her again but she may go somewhere else. She's free.

I can't say that I've seen/recognized the released hummingbird around, but I've been maintaining a clean feeder and it has been getting a lot of action. (Don't let black mold get in there! It can soften hummer beaks!) I moved the feeder closer to the window where I work. The other day I saw a hummer just hover squarely in front of the window, as if looking at me behind my computer.

Sometimes I think Chuck's mom built her nest where we could see it because she knew she wasn't going to make it. She made us Chuck's godparents. That maybe sounds cheesy but I kinda believe it. 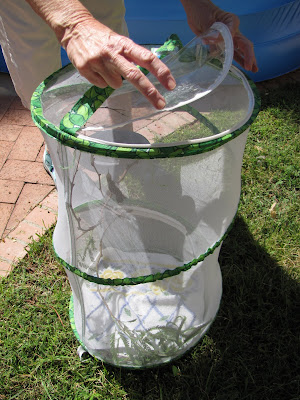 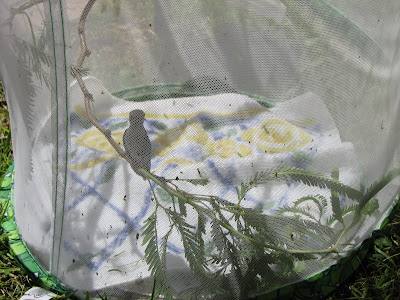 Feeders can make a difference for hummingbird survival, especially during the dry season when nothing is blooming.

Use 4 parts water and 1 part sugar. You don't need red food coloring. In fact, it may be harmful to hummers over the long run.

Clean the feeder regularly by flushing with warm water and scrubbing the inside with a toothbrush.

Once a month clean the feeder with a weak Chlorox solution.

Never let the feeder grow black mold as this can be very harmful to the birds.

Nice work, Eva. We have a hummingbird feeder, meticulously maintained by Daily, at our back door. Our only visitors have been Rufous-tailed Hummingbirds and a couple of Baltimore Orioles, though I´ve seen lists of as many as 54 species registered for Costa Rica. Enjoyed the post.

You're leaving Tucson? Why and where to? Hope all's good.

Still don't know where we're going, but yes, this will probably be my last year of TucsonQuerido. I hope to write a few more posts before we leave!