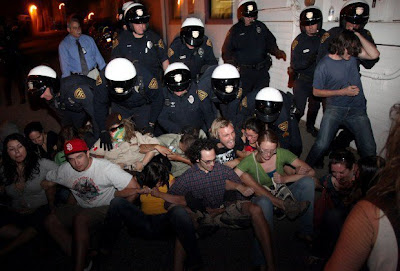 This is a photo from The Arizona Daily Star taken at Tuesday night's Tucson Unified School District Board Meeting. For detailed reporting on what transpired, read this Tucson Weekly report.

The person standing in the blue shirt is a a good friend of mine. A Ph.D. student and a gentle, non-violent guy. This is a photo of him being brutalized by the police. These are his words: "Yeah, we're fine. The cop seems to have had a good strategy. The first thing he did was smack me in the face and almost break my glasses. My automatic reaction was to try to pick them up off the ground, which made me break the chain... not to mention... that he was standing me up by my hair!"

There was no official warning to disperse. The cops just started right in with their violence.

Meanwhile, Tucson Police Chief Roberto Villasenor has stated that "No one was dragged, no one was pushed or forced, no injuries of any kind."

At the beginning of the meeting board president Mark Stegeman said the police were there for student safety, but obviously they were there to intimidate and control the opposition. They didn't protect anyone. What really happened was they arrested students, the parents of students and brutalized students. (There is an Abuse Clinic being held this Friday. It's urgent that we attend.)

Here is footage of the first arrest.

There were 100 police there, many in riot gear. There were also motorcycles, paddy wagons, patrol cars, a trailer and a dog unit. I also have footage of a police helicopter that flew over several times. THIS WAS A SCHOOL DISTRICT BOARD MEETING. As I looked around at the display of force, I had to ask myself "Where am I? I thought we were in the United States, you know, land of the free?"

Not to mention, given the state's financial crisis I'd like to know how much all that so-called security cost.

The students and their parents want to have their voices heard. They want their opinion to be counted in regard to the fate of a program that means so much to them, (regardless of what it means to anyone else.)

The students are the ones who are the most effected by this issue, and ironically they are also the most powerless in this process. Too young to vote, how else can they have a chance to be heard, especially when board president Mark Stegeman has orchestrated a perfect situation in which he doesn't have to listen?

Open meeting law states: “All meetings of any public body shall be public meetings and all persons so desiring shall be permitted to attend and listen to the deliberations and proceedings.” Less than half of the 500 people who showed up were allowed inside the boardroom. It was a terribly inappropriate venue, and what they should have done was re-schedule and re-locate the meeting as soon as that became evident. Instead, the meeting was dragged on for four hours so that by the time Stegeman started pointing out people to be arrested, much of the crowd was gone. Also, it was conveniently more difficult to record the police brutality outside under the cover of dark.

The mountains of data that were trotted out during the meeting were just a stalling technique. Stegeman had packed slides of data on what the programs cost, but when asked what percentage of the student population is Hispanic, for example, he didn't know. (It's 60% by the way!)

If he gets to drone on and on about data without making a point, then shouldn't everyone who wants to speak get whatever amount of time they want? If Open Meeting Law is not clear enough about this, then it needs to be changed.

Tom Horne says ethnic studies promotes ethnic chauvinism, but what I saw on Tuesday was essentially people of color and their sympathizers silenced and forced into obedience by white people through brutal police force. Let's not pretend we live in a post racial society.
Posted by Eva at 10:53 AM