When Life Gives You Lemons, You Paint Them Weird and Race Them Over Two Days 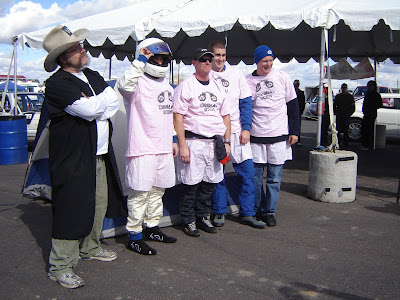 These "criminal scum" pay a penalty a la Joe Arpaio. 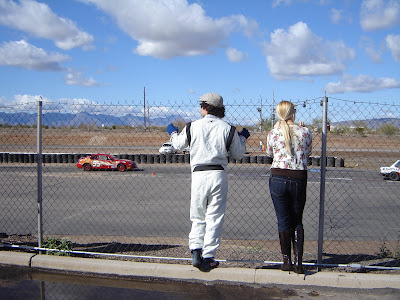 The race has commenced. 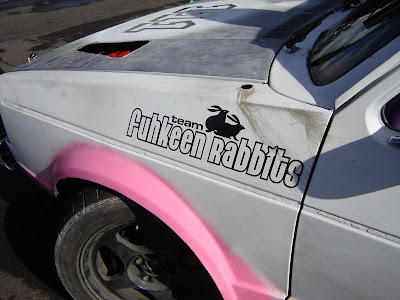 This Volkswagen Rabbit spent most of the corners on 3 wheels. 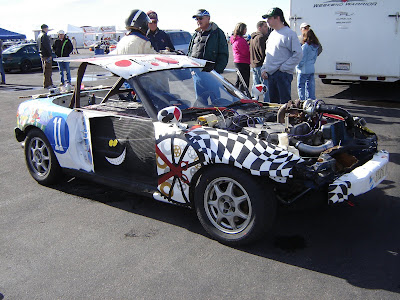 The winner: the Alice in Wonderland Mazda Miata. It says "Drink me" on the front bumper and "Eat me" on the back. If you look closely you can see the tea set bolted to the trunk. 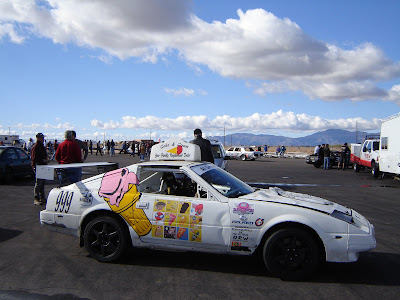 I scream, you scream, we all scream for a Z car.
The current recession, and perhaps prior recessions (Google it), have put a tangible dent in the fender of auto sport culture. The SCCA has had declining attendance at their reasonably priced autocross events, F1 was financially and morally bankrupt (it made bankers seem angelic), NHRA shit-canned several employees, and major manufacturers dropped out of both F1 and the World Rally Championship. Not to mention Jimmie Johnson can suck it (he's making NASCAR even more boring). But I digress.

No I don't. That last one is important. NASCAR, long thought to be the common man's fete voiture, has had more and more fans and critics lament the loss of the recognizable car in NASCAR. Before they unveiled the Car of Tomorrow, it was nearly impossible to distinguish your favorite marquee in the field. Even with the new cars that now have psuedo-bumpers and tuner wings instead of spatula rear decks, all of the cars are identical excepting their Ford, Chevy, Dodge or Toyota stickered badges and "headlight assemblies." Many long for difference in the field, when you could watch the race on Sunday, and buy a reasonable approximation of the same winning vehicle on Monday! I would buy that Toyota Camry!

I made up fete voiture, because it sounds French, just like the seeming savior of auto sport, the 24 hours of LeMons. LeMons, not LeMans, is only 4 years old, but its spirit is timeless. The rules; you can't spend more than $500 for the car (without penalty), and you must have fun. Ultimately, the car with the most laps after two days can "win," but there are also Index of Effluency (most with least), Judge's choice, Good-Bad-Ugly, Most Heroic Fix, and Dangerous Homemade technology awards, to name a few. The penalties are equally esoteric; Hit a cone? bolt one to your cars roof. Go off the track? Pitch a tent Arpaio style. This goofy grading has the simultaneous ability to be entertaining and keep tempers, stress, and seriousness low. The event, which started in California, has resonated so much with auto sport fans, that it has spread to cities throughout the U.S., including Phoenix!

My awesome wife surprised me this January with a trip to Phoenix's first LeMons event, held at Firebird International Raceway, and it did not disappoint. LeMons participants look like mostly serious racers, with trailers, matching fireproof suits, and even sponsors, but each car usually has a not so serious theme that even kids will understand. This years winner was an Alice in Wonderland themed Mazda Miata. There was also the B-team, B.A baracus BMW (with mohawk), and a Volkswagen Rabbit, with ears! It was a small field in comparison to other venues, but every bit as exciting as a multi-million dollar open wheel race (of which I've been to two, both Indy car events). You may not recognize the drivers, but once you witness the field, regardless of your technical knowledge, you have picked your favorite. Do you like the matte black sedan with the skull for the headlight, or the ingenious roadster with a PVC plumbed turbo and intercooler?
Posted by Andrew at 9:42 AM