What to Expect When You're Expecting To Ski 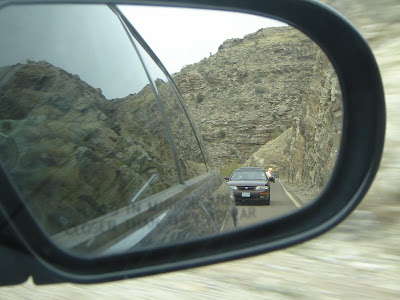 Blow-up Doll is ready to sled. 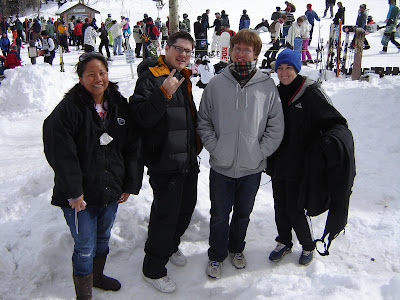 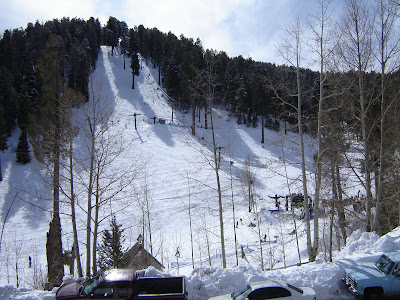 The ski lift in its full glory.

My appreciation for Tucson almost always leads to comparisons to my former hometowns. One of Tucson's advantages, I like to pronounce, is that it has the best of both worlds; you can find yourself in the most beautiful desert in 100 degree ass-charring heat, and in one hour drive to a cool Alpine-esque escape. I of course am thinking of Mt. Lemmon when I pronounce such things, part of the Santa Catalina range and by no means an unblogged-about topic on this site. However, I do sometimes reminisce positively about various winter practices when I think about the Midwest, such as sledding, skiing, bundling, and shoveling. Most of the year, these things aren't possible or necessary in Tucson, but driving home from work this week I caught a glimpse of my past and my near future: the snow capped Catalinas, and the most Southern ski slopes in the Continental United States (I don't know if Hawaii or Puerto Rico has any mountains or snow, but you can't drive there easily from Tucson anyways).

As I mentioned, Mt. Lemmon and the ski area (there's no room to call it a resort) has been blogged about before, but more as a novelty. It's hard to imagine when you're standing at the foot of the slopes in summer that any snowfall might accumulate enough to recreate James Bond chase scenes. But when you drive up Catalina Highway and pass the 6000 foot marker, Bing Crosby invariably croons in your head. And you won't be alone either, as most of the population of the Mexican state of Sonora is there, too! Relax, there's plenty of snow for everyone to take some home in their truck bed or on the roof of the SUV. Just don't let the county deputies spot you.

Back to my commute. I resolved to take advantage of this sliver in snow-capable time and by the miracles of Facebook, I had united a posse to determine Mt. Lemmon's ski-worthiness. Everyone was seemingly resolute about being able to say they had done what few Tucsonians have ever done before; Ski the Lemmon (.com)!

And they still can't say that. It wasn't for lack of enthusiasm, because if we had had any less, we would have given up at the bottom of Ski Run road, which they had just closed due to lack of parking. No, no, we'll park a ways up the highway and walk the 1+ mile, 13% grade to The Iron Door and have lunch. Which we did. And the Iron Door was suitably good-eats as well as suitably overpriced. Alright, lunch done, let's get our ski on. Well, we'll have to wait for rental skis, oh, and we stop renting at 2 p.m., or now, whichever is sooner. Where is this on their website!?

I give mad proper respect to my friends for not being dejected at that point. Some of them had already went out and bought some of the more specialized snow hardware from a previously unknown (to me) Tucson ski shop, Peter Glenn, in anticipation of this adventure. With some clairvoyance, one of them at least brought a saucer sled, so we were able to participate with the commoners on make-shift sledding hills, full of broken necks for everyone! And we were ahead of the game even then, as many Tucsonians didn't have recognizable sleds, using cardboard boxes, car floor mats, yoga mats, inflatable air mattresses, and boogie boards. Additionally, I'm convinced someone was using an inflatable sex-doll. For sledding.

We all resolved to come back the next day at the butt-crack of dawn, make the hour long trip up the mountain again, and risk life and limb for the status of "Arizona skiier!!!!111lol". But as God had giveth us snow, he doth takest awayath our skiiath. Life intervened, as it usually does, and the trip will not be made so soon.

The snow may melt, but our determination is frozen for good! See you next year, Ski Valley!

Text: Andrew
Photos: Eva
Posted by Andrew at 9:11 AM

I love to ski, it's my most favorite sport that I actually participate. For me, yes a lot of the fun is the acceleration and wind blowing across your face as you dip and dive down the mountain. But %50 of the fun, or maybe even more is the time spent with friends, having fun, apres ski cocktails, and just some great memories of a great day. To me, reading the blog post and seeing the pictures, I'd say it was a completely successful day at the slopes, sans skis. I wish I was there.