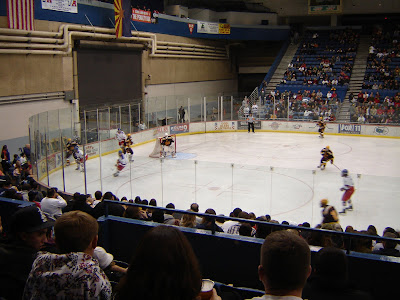 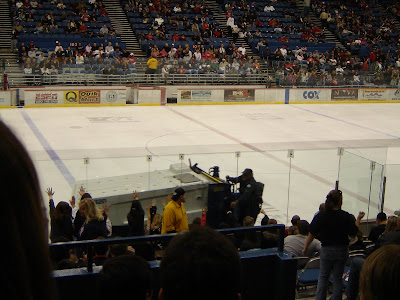 Zamboni driver giving everyone high fives through the wall. 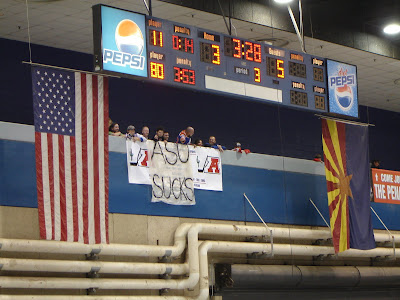 ASU sucks. (This is one of the oldest collegiate rivalries in the country, gotta keep it up.) 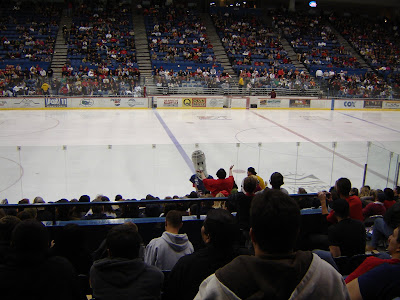 It's a Saturday night and we have planned to go to an actual ice hockey game with some friends and neighbors. Morgan and Caroline set out for the box office at 5:00 to get tix for the 7:00 game. We get a text message from Caroline: "traffic is crazy. maybe we should try this some other time." I'm thinking to myself, "When have we ever abandoned plans because of Tucson traffic?"

Andrew uses Google maps with traffic view to plot a route, avoiding Broadway's bumper to bumper gridlock. WTF? Oh yes, the ballet just got out and everything is blocked off for the Parade of Lights.

Eventually we make it to the TCC and I'm enjoying the crisp taste of overpriced light beer, the clacking of sticks, and the cheers of the crowd when the fight breaks out. Two young dudes get into it, one of them falls backward into his girlfriend, who is wearing one of those slightly ridiculous DIY sexified Arizona tee shirt top things. When he hits the ground, the other dude and his friends pounce like a pack of wild hyenas. The cops are watching the game when this happen. Eventually they jog over, laughing.

After the game, when the crowd starts pouring out, a fan throws a Coke at the opposing team, which explodes onto the ice.

"How savage!" our anthropologist friend remarks.

To read more about the story of how an ice hockey team's popularity blooms in the desert, check out this recent piece in the Tucson Weekly.*

*In response to what coach Golembiewski said about getting the players to give a damn, I don't know anything about ice hockey but these guys did not always appear to give a damn. One player seemed not to realize a play was in progress until the puck flew past him.
Posted by Eva at 8:18 PM