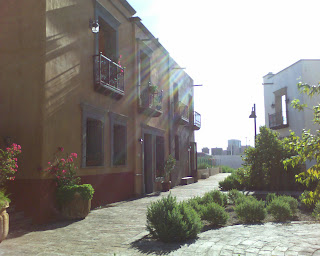 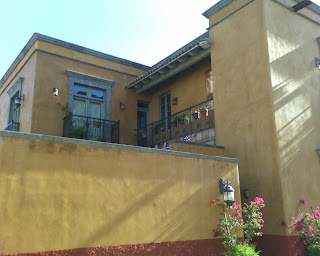 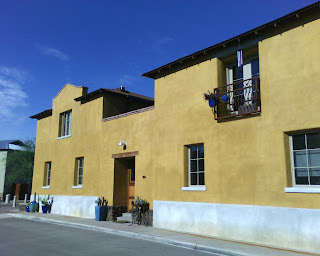 These are photos of the Mercado District taken by Andrew Haberbosch.
This summer I find myself getting up at 4 or 5 in the morning to ride my bike. It's not the first summer I've developed what some of my friends call a hard-core habit.

I don't find it hard core. I roll out of bed, but on some clothes, pack in my wallet, phone, sunglasses, water and a breakfast bar. It's a five minute stumble. I usually take a nap later.

The moment I start pedaling it's all worth it.

The streets are quiet except for the birds. It's a cool 80 degrees. The sunrise is lovely.

I'm always hungry for new nearby routes (by that I mean ones I can begin around campus and complete in under 2 hours, that avoid major traffic, that are scenic or charming...) Suggestions?

Here's a description of a few favorite routes in no particular order:
(Check out the Tucson Metro Bike Map to orient yourself)

Santa Cruz Park
This is a shared-use path, and it is not highly used. I'm curious about why I usually come across mostly homeless people. (This is not a problem, in fact, they have been better at controlling their dogs than "mainstream" people.)

The wildlife is usually great, since this path is near the edge of town. I just saw two Ferruginous Hawks this morning.

The path ends sadly at a women's prison. I feel so free when I bike, seeing my sisters behind bars is a stark contrast.

Some of the cool side stops are the award-winning Mercado District (Gracias por mostrarmelo, Erika!) and The Garden of Gethsemane.

Aviation Bikeway
This shared-use path is super convenient for me. I just zip south on Highland to Aviation Bikeway and take that nearly all the way to Davis Monthan.

I like the view of the Catalinas near the end, and the wildlife around Freedom Park.

I like the privacy of this bikeway, especially if I just want to think. It's not very highly used and doesn't involve very much interaction with a.m. traffic.

River Park
This is yet another shared-use path. I take Mountain all the way up, and then follow the Rillito to La Cholla, I haven't make it all the way to the end yet. This is a marvelous path with quaint bridges and tree cover, but it's wildly popular with everyone--cyclists, walkers, runners, etc. NOT everyone knows how to share, either (I'm talking to YOU, path-hogging cyclists!).

Arroyo Chico/Reid Park a.k.a Dream Neighborhoods Ride
For a shorter ride, I like to take in some of desert oasis neighborhoods of Tucson by starting out east on 3rd St. First I let the Sam Hughes million dollar homes boggle my mind. Then I head South around Dodge and delight in El Montevideo historic neighborhood. I make a loop around the Randolph Golf Course (don't forget to take the shortcut with the duckies!). I then follow Arroyo Chico through Colonia Solana (another place I wouldn't mind living!) and then on to Campbell which I take home. This loop is easily expandable by taking Mountain up to Rillito, taking Rillito east, coming back down on Dodge all the way to Reid Park, etc.

Downtown
I'm pretty familiar with every downtown route combination from doing the Tuesday Night Bike Rides, so I don't make this a morning target very often. My favorite parts involve Basket and Snake Bridges, La Placita, and Armory Park del Sol.
Posted by Eva at 10:56 AM

Sentinel Peak; S. Mission to San Xavier; West Tucson (say, Speedway or 6th St out to Anklam, to Gates Pass, or Silverbell to Northwest Tucson Mntns); Tanque Verde east to Reddington, or Catalina Hwy (and all the way up Mt Lemmon!); Swan north to Sunrise, east to Craycroft, north to the loop to Kolb... How much time did you say you have?

This is a nice post - thanks! I would love to get into some "hard core" early morning biking. Tucson sure has its luxuries.

I love the River Park. You should take it East some time; it's very nice. see you on the road.