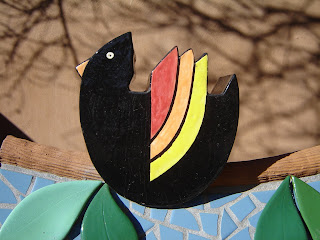 Photo taken in Santa Fe, New Mexico.
As the weather in Tucson gets hotter, we search for cooler places to escape to within driving distance. New Mexico is right next door, and it has so much to offer, as my Spring Break New Mexican Adventure with my mom reveals.

Our first stop was Hatch, a small town known for its chile pepper harvest. We had lunch at The Pepper Pot: I ordered a famous relleno (that's a green chile relleno, as pictured below to be precise). It was delicious. The Pepper Pot is owned by a woman who moved to Hatch from Mexico to harvest chiles, and ended up cooking them instead. The place was definitely bustling, (with local politicians even) which reminds me to advise: get there early if you can because when the daily food rations run out, that's it! 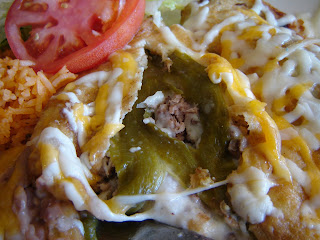 By night we arrived in Santa Fe, where we stayed at the Inn on the Alameda at the suggestion of our friends. The hotel is cozy, well located and affordable. Only drawback: no mini-fridge to put leftovers in.

Once checked into our hotel we went for a stroll and had a drink at Evangelo's, a bar owned by Nick Klonis, son of Angelo Klonis, a Greek who became an American icon of WWII. The entire bar is dedicated to his memory (see image below). The next day we had a breakfast at The French Pastry Shop. It has great ambiance, but no chocolate-filled croissants. How can you have a French pastry shop with no chocolate croissants??? Harrumph.

Being that I had to make an emergency run to the CVS, we stopped at the Devargas Shopping Center and had a coffee at Java Joe's. Their motto is "Business is great, people are terrific, life is groovey." Later on I learned that they had won Best Independent Coffee House in 2008. I can see why.

Another Santa Fe eatery worth visiting is El Farol. Luckily, it was Monday night, and on Monday nights they offer a 40% discount on dinners and bottles of wine. (Well, at least at the time they did). For a killer price, we had a bottle of Guelbenzu Azul and a slew of very impressive, original tapas: codorniz (quail), pato (duck), gambas (shrimp), queso de cabra (goat cheese). Food: a variety of complex flavors. Service: genuinely friendly and attentive. Ambiance: historic, bohemian, cosy, artsy...in a word--El Farol is sexy. 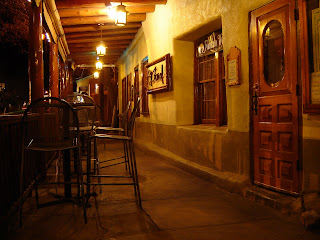 A shot from the front of El Farol.

If you gather nothing from what I've written so far, you have probably noticed that we ate our way through Santa Fe. But Santa Fe is also a fun place to go jewelry shopping. There were 50% - 75% discounts on jewelry everywhere. I passed up a pair of green turqouise earrings that I still think about to this day :( BUT, I did get some cool huayruro seed earrings made by the delightful Patricia Angermuller of Macchu Picchu Jewelry. ( In Peru, Huayruro is said to bring good luck, fame and fortune while warding off envy.)

Generally, window shopping and hanging out in the Plaza are a laid-back way to spend an afternoon in Santa Fe. My favorite store was probably Yipee Yi Yo, where I got a Virgen de Guadalupe pot holder from Embudo Fabric Design. 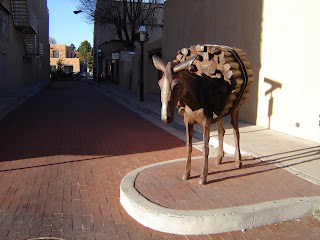 Burro Alley and San Francisco Street, downtown Santa Fe.
What really started my mom and I on our trip is our mutual fandom of Georgia O'Keefe. We did the audio tour of The Georgia O'Keefe Museum. The tour includes a screening of footage of O'Keefe much like this. The whole thing was educational and inspiring. I hadn't known that she had originally developed her public persona as an artist much in the shadow of her husband, and her relationship with her husband, Alfred Stiglizt. It reminds me of how Frida spent so much time in Rivera's shadow, yet today is remembered as an artist who stands entirely autonomous in terms of her indelible mark on the art world.

We also really wanted to visit O'Keefe's houses: Ghost Ranch and the house in Abiquiu, but since they are on reservations and it was a time of religious holiday, we had to save that part for next time.

Our last stop in Santa Fe was Museum Hill; go there just for the views and a coffee if nothing else! We visited The Museum of International Folk Art, which I loved (I heart folk art). They also have a noteworthy gift shop. 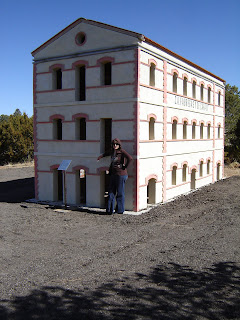 Yours truly on Museum Hill in front of this piece by Spanish artist Martí Anson: Martí and the Flour Factory. The piece is a scaled down replica of an original old flour mill in Mataró, Spain and constitutes a fascinating commentary on art, urban space, preservation, identity, tradition and transnationalism. It's all that and more, but in this interview with Anson, he states: “All my work is stupid because I love wasting time.” Well I love you, Martí Anson.

This is the Artist's statement as it reads at the site of the piece:

"Astonished by the controversy that was stirred up by the proposed demolition of an old flour mill in my home town, I decided to take the building to New Mexico.

I carried out the whole project with my own hands, an act of faith to save the heritage of my home town. I built a copy of the original flour mill, brick by brick, in Santa Fe. After the exhibition, the building will be handed over to the city to take place among the existing adobe structures for any function other than being an artwork."

More on New Mexico (Taos, Truth or Concequences and Elephant Butte) to come...
Posted by Eva at 5:12 PM

Oh wow! Delicious pix and story bites. There are so many rad places to visit in the southwest--thx for sharing your NM experience!