You know what else is awesome about Jerome? Eating and drinking. There are so many neat places to chow down. It's enough to make you want to spend the night in one of their haunted B&Bs just to get up the next morning and keep eating around the town...
Posted by Eva at 5:22 PM No comments:

Email ThisBlogThis!Share to TwitterShare to FacebookShare to Pinterest
Labels: Jerome, The Haunted Hamburger I don't know why exactly, but there were five Lamborghinis parked together in this lot in Jerome. It seems to be a popular place to road trip to in your Sunday car or on your motorcycle, with the lovely views and curves all along the road...
Posted by Eva at 5:16 PM No comments: The first thing you do when you get to Jerome is go to the Liberty Theater. They have this really cheesy documentary on Jerome's history narrated from the point of view of a miner's ghost who inevitably ends every anecdote with "...and then it burned down!" Yes, Jerome has had a lot of fires, apparently. The theater is awesome, and as you walk around Jerome afterwards, you relate all the stories from the show to the buildings, the street corners, the art galleries, the oldest eateries...like the mythical madame's, the wildest gambling parties, the fortunes that were made and lost...
Posted by Eva at 8:51 PM No comments: Jerome was just a side trip on the way to Sedona, but honestly, I ended up liking it a lot more than Sedona. Sedona is gorgeous but as a community, Jerome is pretty unique. It was a mining boom town back in the day. Then the mines closed. Then it became a ghost town. Then the hippies started coming in. Now it's an isolated art community with a sustaining, niche tourist industry. All those cultures: mining, hippie, artist...rolled into one historic town nestled in the side of a mountain. It's pretty cool.
Posted by Eva at 8:37 PM No comments: What is Mexican Train? Mexican Train is a domino game, played mainly in the USA. It is probably best for four or more players. It's a staple at our place on weekends since Andrew's gramma taught me how to play. The neighbors come over, we drink, eat and play Mexican Train until we pass out. It's fun.

So my problem is the following: Wikipedia has tagged "Mexican Train" as Wikipedia articles with topics of unclear importance from December 2006. What?! Mexican Train is SOOO clearly important!

Being that I am studying for comps, I don't have the time to beef up that wiki piece. Please, anybody, get in there and SAVE MEXICAN TRAIN.
Posted by Eva at 12:43 PM 1 comment: I don't usually post negative reviews on this site, but anyone planning on flying United to or from Tucson should be advised of the risk!

My best friend's dad died a few months ago so I thought it would be great if I could get her out of freezing Chicago and into sunny Tucson for a weekend of great hiking, eating and drinking. We haven't seen each other in over two years. I'm also pretty stressed out with my MA exams coming up, so it was going to be a two day vacation for both of us. I bought her tickets with my miles, since I have (had) a United credit card that accumulates miles. (I have since closed my account.)

Her plane out of Chicago sat on the tarmac for two hours, so she missed her connecting flight out of Dulles. Once at Dulles, they told her there were no more flights to Tucson or anywhere nearby for that night. They told her the earliest they could get her to Tucson was over 24 hours later. What for? Just to turn around again in another 24? We only had two days to begin with. She told them she would just turn around, go home to Chicago and use the miles some other time. They told her my miles would be refunded. They weren't.

Not only did she waste her vacation day flying around the country for nothing, but we never did get to see each other. Considering the inconvenience, expense, disappointment and frustration, you would think United would have refunded the miles and then some. Well, it took me an hour on the phone with Customer Service agents to get back only half of the miles. I told them the whole story. They told me that was the best they could possibly do.

I got scammed pretty royally, and apparently, so have a lot of people. A Google search of "United Airlines Sucks" brings up a lot of results, these are just a few:

Then there are literally over 100 negative reviews of United on this website: http://www.my3cents.com/search.cgi?criteria=United+Airlines

Perhaps the scariest question to pose is, if they care so little about customer satisfaction, is that any indication of how they prioritize customer safety???

Get the message. Don't become of victim of United Airlines!
Posted by Eva at 4:13 PM No comments:

Attack of the Gila Monster

Andrew made this for my birthday last year while I was in Paraguay. It's awesome.
Posted by Eva at 5:41 PM No comments: 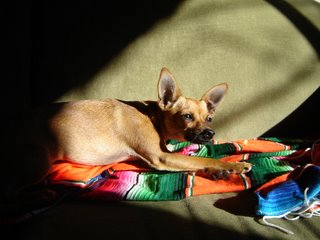 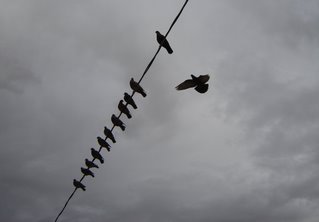 A place to hike with a dog, solitude, beautiful views, a windmill, a historic Ranch house in the middle of nowhere. The little town of Oracle. Eating at Arby's for the hell of it on the way back.
Posted by Eva at 10:22 PM No comments: 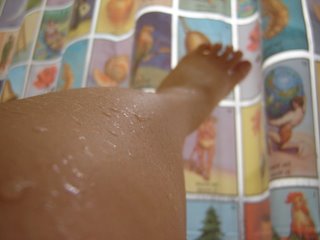 I love a truly good show as much as anyone. Maybe more. I'm talking about the kind of show that takes you someplace else and gives you that energy every time you remember it. It makes you nostalgic and romantic and a little giddy. That's the kind of feeling I expect to get from the Lila Downs show on March 4 at Centennial Hall. (It will be the first time I see her live.) Then, March 6 Lucinda Williams will certainly bring back my wild cowgirl days from that summer I worked on a dude ranch in the Rockies. But the real pièce de résistance will be Cat Power's secret appearance at Club Congress the next night. If you go to the Matador Records website and then Club Congress, you will find they have no idea that Cat's supposed to be there. So will she? Or is it just a shhhhhhhhh...secret...I wouldn't even be publishing this if I didn't think my readership was uh, low.
Posted by Eva at 9:47 PM No comments: