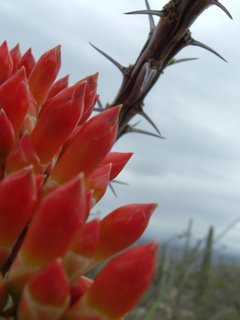 This is a photo of an ocotillo bloom off the trail.

On Tuesday I went to Finger Rock Trail because I just needed to get a hike in. Monday had been pretty stressful. I chose Finger Rock because it was close. I knew it was hard but I didn't know how hard.

But it's not the full body punishment, the hiking that is more accurately described as mountain climbing due to steepness, the painful slowness it takes to come down without rolling down, the extreme focus needed to choose one foot hold after another correctly, or the ghosts...none of that REALLY bothered me...

What bothered me was finding myself on my hands and knees on a slick rock with nothing to hold on to, sliding slightly towards the precipice and a thirty foot drop.

It had been showering a little, so it was slick. Real slick.

I knew that if I kept my center of gravity as low as possible I could make it across without sliding to my death, so I turned my body around and did a butt scoot very slowly until I got to safety. For a few moments I had to stop and wonder if it was going to work. Have you ever watched a movie where the rocks around the heroine get loose and fly down into the abyss? That happened.

The moral of the story: don't do Finger Rock when it's raining.
Posted by Eva at 5:32 PM