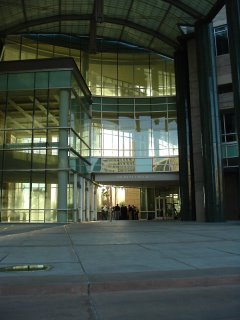 This is the afternoon January 5th press conference outside the court.

I promise that this is about as political as I will get on this blog. I leave the political stuff to Jerome and Michael.

The No More Deaths volunteers are still on trial. If you're unfamiliar with their story, you can check out these links to ePluribus Media, The Durango Hearald, The Denver Post, Amnesty International, NPR, The Arizona Daily Star.

But as if the story itself weren't bizarre enough, some of the websites I discovered while researching the story are downright disturbing. For example,

Glenn Spencer's American Patrol Report which refers to the volunteers as "Reconquistas" with a Loony Tunes icon next to their news article and includes racist and degrading images and comments such as "No way, Jose" and Mexican flags with exes through them, etc.

But I don't want to focus only on the most radical. I mean, in the elevator to the courtroom this morning a woman rather suspiciously and antagonistically asked me if I am a vigilante. She didn't apologize when I told her that I'm a member of the UA NMD Club, either.

But like I said, I don't want to focus on the most radical.

I had busted ass to get to court on time just to have the trial put into recess AGAIN, this time until Jan 10. There was no explanation as to why, but I suspect the judge is sick. Honestly, in his defense, he looked like crap.

Anyway, I will try to attend court on the tenth and post updates. In the meantime, if anyone is interested in going with me, let me know. If you're interested in taking whatever action you can,
I have included a link to the NMD action kit which includes a postcard to the DA asking that the charges be dropped.