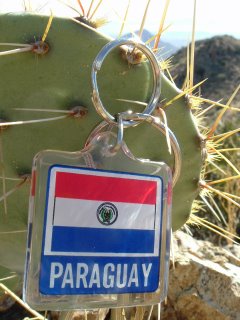 I claim Amole Peak for Paraguay.

It's hard to write anything new about this famous trail (see for example this review on GORP.com) which has been raved about the world over. Some say it is the easiest summit hike in the state of Arizona. Some describe it as "moderate" or even "strenuous". I would call it A HARD CORE ASS KICKER. I can hike all day without tiring if the trail is fairly flat, but this trail is about two hours of uphill grade after an initial staircase climb that nearly made me vomit. (And then it's about two more hours to get back, although thankfully, that is mostly downhill.) It's true, I had a pack, but it wasn't more than a few pounds. I think people who write trail reports online are either a) Olympic hikers or b) can't admit that a trail kicked their ass because nobody else did. Well, let me be the first: THIS TRAIL KICKED MY ASS. That said, I would still recommend it to anyone. (And thanks to Chip, the friendliest Park Ranger ever who recommended it to me.)

People who write about this trail often use the phrase "rejuvenation of the soul" or "spiritual renewal". My feeling is why go to church when you have trails like this? It is communion with God - and she is awesome. From this trail you get views across the broad basin of the Avra Valley, its farms, and what appears to be a very straight road but is actually the canal of the controversial Central Arizona Project (CAP), which delivers water from the Colorado River to Phoenix and Tucson. You can also see the Roskruge, Waterman, and Silver Bell ranges as well as the loftier Santa Rosa Mountains nearly 40 miles away. I was able to pick out Kitt Peak, but can anyone name what appears to be a large mining endeavor in Avra Valley? (See photo).

I started on the trail at about 9:30 am. It was so quiet that I kept stopping to identify a noise that turned out to be the crinkling of the plastic water bottle in my backpack. After I made the initial climb without vomiting, the first "mini summit" revealed a boulder and cacti garden like no other. A ways down the trail I came upon the old mine and faced with the temptation to investigate further, found it easy to resist. I didn't want to end up like the twelve coal miners from West Virginia whose fate had just been revealed that morning, may they rest in peace. At several points my phone rang; the office asking me if I needed desk copies for the upcoming semester, a wrong number from Chicago asking for "Nacho", Andrew picture messaging me a photo of his office building as retaliation for me having previously sent him a photo of Kitt Peak. So we can safely say there's service up there. I didn't run into many other hikers UNTIL I got to Amole Peak. All hell was breaking loose with a four person party of giggling Asian girls, about twenty seniors wearing blueblockers, and a mother with three teenagers at different points on the trail yelling at each other across the valley. We needed traffic signals. I was sorely disappointed because I had naively envisioned eating my mozzarella, sundried tomato spinach sandwich on Focaccia on Wasson's Peak by myself, taking in the majesty in silence from the very top of a summit named after a controversial early editor of the Tucson Citizen. But alas, that was not going to happen. So I climbed Amole Peak instead and set up camp. No one challenged me. I read a little bit of Barbara Kingsolver's The Bean Trees. My favorite line so far is "Arizona didn't do anything halfway. If Arizona was a movie you wouldn't believe it. You'd say it was too corny for words."

See the photos at my photo gallery.
Posted by Eva at 11:32 AM