PRESENTE: inside the migrant trail walk 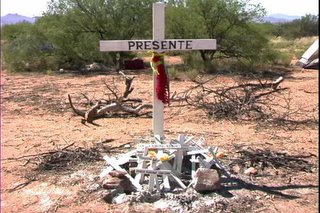 Last night I went to The Screening Room downtown to see this documentary by J.M. Aragon with music by Jose "Pepo" Saavedra. (Aragon has an accent on the "o" but my Html is acting up.) It was described as "a documentary that uses artistic video imagery accompanied by a compelling musical score to convey a reflective look into the Migrant Trail Walk of 2005."

As Aragon brought up in the Q&A, migrant issue film/art is becoming its own genre in this country, bringing film and documentary makers from all over to AZ. This puts anyone who wants to participate in this "genre" in the position of competing against projects that have serious funds. Take for example the documentary Crossing Arizona that just debuted at the Sundance Film Festival. That said, Aragon should be commended for taking on this endeavor with the backing of the small non-profit Panleft Productions, whose funds are so limited that if you clicked on the previous link, it is likely that you couldn't find the website. They need a new host. (I should have donated some money last night.)

As I sat through the documentary there were long moments of slow motion sequences of white people just walking. At first I thought, "This is some really long filler." and then I realized "They walked for seven days in the desert in the summer. You can see it's hot and grueling. That's what these shots are really trying to convey." Sure enough, that's along the lines of what Aragon stated during the Q&A. Even so, I was left with the overwhelming dissatisfaction of the "That's it?" moment at the end. There are so many questions. I wanted more answers. I wanted more stories. I wanted more words.

That leads me to my next point. Why did Aragon choose to do a documentary about privileged people sorta "recreating" the crossing experience of impoverished illegal immigrants? Why didn't he choose to do a documentary about actual border crossers? Like he said in his defense, that would have been a different project and difficult to do the right way. His documentary is what it is - and it is uplifting and hopeful to see privileged people making these kinds of statements while acknowledging their privilege. But I still can't help but yearn for a different project. When will the migrants themselves have voices? Yes, it would imply a huge risk for them and possibly even the producers, but sometimes people have to stand up and take those risks. I think we're seeing that.

In conclusion, I would like to congratulate Aragon once again and I do hope his work gets great circulation. Also, I've been listening to Pepo's music for about a year now, but it never moved me as much as in the context of Aragon's images.

Photo as it appears on The Screening Room Website.
Posted by Eva at 9:10 AM