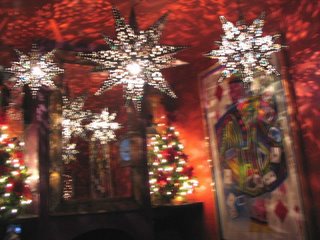 Everyone should go to Nogales at least once. I can't explain how disturbing it is to cross the imaginary line between the American Dream and....well, you'll have to see it for yourself. I prefer to avoid repeating the common idea that Mexico is poverty and poverty is Mexican - my point is this uneven modernity is shocking. I am no stranger to "third world" environments after growing up in Paraguay but to see them juxtaposed by the U.S. border; well, I had never experienced that before. Mexico and the USA could geographically be the same country. So why is one so priviledged over the other?

I must mention that there's a spot you wouldn't know to look for without the tip. It's a restaurant called La Roca and it's down a somewhat seedy alley but when you get inside the courtyard it's unbelievable. We only hung out at the bar, but I bet the food is good. Ask anyone, "Donde esta La Roca?" and they will probably be able to show you the way.

This photo from inside La Roca is courtesy of Mia.
Posted by Eva at 7:54 PM

The food at La Roca is quite good. Their steak is excellent. I went there for Thanksgiving dinner.