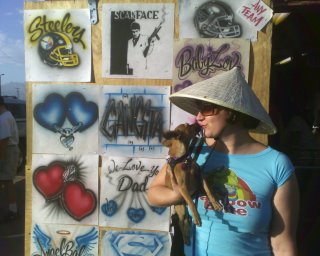 Andrew (read: boyfriend) introduced me to the Tanque Verde Swap Meet. (A co-worker of his has a table there on weekends.) The first time we went it reminded me a little of the flea market in Oaxaca City, except it's outdoors, more spread out, cleaner, etc. Rows of booths and tables selling used articles, candy, clothes, stuff made in China, toys, tools, kitchen supplies, fresh produce, jewelry, electronics, CDs, DVDs, VHS tapes, video games, food etc. etc. I have purchased three sequined belts, five pairs of flip flops, fifteen pairs of earrings, one CD (Los Horoscopos), one Loteria game, tomatoes, onions, one Sonoran hotdog, one Coke and four garden plants after three trips to the TVSM.

We've never been there at night, they say it is much more festive then, but it's still rather festive in the afternoon. It's obvious that people go there for commerce but also just to hang out. There's definitely a sense of community. They even have pony rides in the evening. People take their kids and dogs.

I bought all five of the pairs of flip flops the very first time I went. I wear flip flops pretty religiously and I would say "buyer beware" because the straps already busted on one pair. I took my time checking out the women's clothes (which reminded me of a store on in called "Chica's Secret") but I can only go so ghettofab. I mean, I like the style and am even considering getting a gold necklace that says "Hot " to represent my barrio sisters in the G School (G for Graduate). I like to displace signifiers whenever possible, but I can't stand synthetic fabrics which pretty much puts all the bootie-licious ass pants and frilly ho blouses (as my sister calls them) sold at the TVSM off limits for me.

There's something fascinating about the imitation of high fashion. Bebe and Louis Vitton knock offs are everywhere. Why do people even bother buying the crap? Because if you can't afford to buy a "nice thing" you buy something that represents a "nice thing". It is no longer the thing itself that matters but what it represents. It's like melodramatic acting in a telenovela.

I have recently developed an interest in Pasito Durangense and other types of Tecnobanda music, and the TVSM is definitely a good place for buying it. There's actually a variety of musica en español to be found, but if you look white you may be stared down by a girl working the store by entrance B. Apparently she thought my nails were too short. It'll be fisticuffs next time.

When you're not getting into cat fights at the TVSM you can purchase a beer from one of the characteristic beer selling units, that is, a keg on a golf cart. There's food too, and as I mentioned, plenty of video games to play. And you can always browse the odder stuff. People sell some weird shit sometimes, like their tripped out SUV with brand new dubs or their grandmother. (Okay, I've never seen anyone sell their grandmother there - yet.)

Oddly enough, i have yet to try the beer selling units, which would usually be my first purchase.

three weeks- you, me, karligg, tecnobanda booty shakin' and all the bootie-licious ass pants and frilly ho blouses we can find.