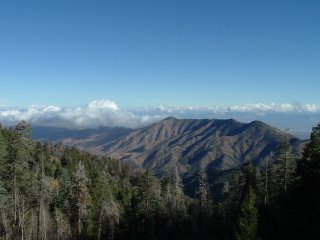 I was rather stunned the first time I went up to Mount Lemmon. It was such a straight shot: follow Speedway east, then go north on up to Catalina Highway and follow that all the way to the end, basically. It only took about an hour from our doorstep (near the UA) to the top, but I felt as if we had exited the Southwest entirely. The desert, the cacti, the sand all fell away as we climbed, replaced by denser and denser vegetation, evergreens and deciduous trees. The temperature dropped by what felt like twenty degrees. Tucson was sprawled out below us, looking smaller than I would have guessed.

At the end of the road we found two tiny communities: Ski Valley and Summerhaven. Ski Valley has the ski lift, obviously, that will take you uphill for $9 even when there is no snow, which is most of the time. Even from the parking lot the view is spectacular. There’s also a gift shop and what not. The restaurant is said to have a great view.

Summerhaven has two eateries and a few gift shops as well. Most of Summerhaven was burned down a few years ago in a forest fire. Forest fires are a very real and common danger in the Tucson area. I’m amazed that these people bother rebuilding, to tell you the truth. You can still see a few of the charred building remains and large patches of the mountainside are dead or just starting to show new growth.

In my opinion, the best things about Summerhaven are the hiking with spectacular views and some fun boulder climbing, and the pie. The last time I went with a few friends from the Spanish Department we went all the way to the end of the road and hiked the Marshall Gulch Train and returned on the Aspen Trail. There’s a spot on the Aspen Trail where if you a climb a little boulder you can sit and look out at a spectacular vista. It’s a little bit tucked away, sort of private and romantic and very beautiful. It would be a memorable spot for say, proposing marriage, eating a granola bar, shooting a music video, etc.

After that hike (which takes about three hours by the way and is not recommendable for the very out of shape) we got a picnic table and had lunch, which would have been more fun had we been joined by a bear or if the sun had stayed out. Then we warmed up at Mount Lemmon Café and had a piece of their famous pie. The service wasn’t great, but I gather it’s hard for them to find full time help all the way up there and it’s a popular spot for tourists. Point being, they were crazy busy and under staffed. However, a piece of pie heated up a la mode with a cup of coffee is a wonderful thing for two (or three) people to share after a long hike.
Posted by Eva at 11:33 AM